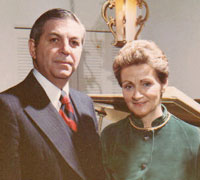 The Tom and Mary Jo’s Bowl of Soup Advisory Fund was created by David and Midge Schafer as a memorial to their parents.

Thomas V. Angott (1926-2008) was a graduate of the University of Detroit and chairman of the board of Burger Creamery.

He served on the boards of nearly every major dairy association, including the National Dairy Council, United Dairy Industry Association, Milk Industry Foundation and the Michigan Dairy Foods Association.

Highlighting his distinguished career outside of business, he was the Detroit Fire Commissioner in the 1960s and 1970s, commanding the city’s firefighting forces during the civil riots of 1967.

He also served on the commissions or delegations for four Michigan governors and five U.S. presidents, including an agricultural exchange mission behind the Iron Curtain to Red China at the direction of President Carter prior to the establishment of formal diplomatic relations with the United States.

In the 1980s, he was a member of a civilian delegation to the war-torn Middle East, supervising the safe and orderly withdrawal of Israeli troops from Lebanon.

During his lifetime, Mr. Angott was chairman, president, regent or director to seven universities and colleges, eight hospitals and medical centers, and over one hundred charities.

She attended Mary Grove College in Detroit and majored in early education.

She was a wife and mother to eight children.

She shared many of her husband’s interests and joined with him in service to their church and numerous charitable institutions.