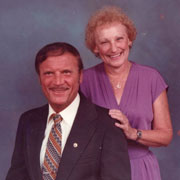 This fund, which provides income for the general grant making program of the Community Foundation, was created to honor the lives of Jacques (1922-2015) and Charlotte (1924-1996) Toussaint.

Jacques Toussaint was born on December 3, 1922 in Roubaix France, which is located along the Belgium border.

He was the son of Joseph and Marie (Vandekerckhove) Toussaint.

His parents and their three children immigrated to the United States when Jacques was a toddler.

He worked for twenty-nine years for Ward Machinery of Chicago as a tool and die maker.

He then was in business for himself for the next twenty-one years.  His business was located on River Street in Aurora.

He married Charlotte Vettel in 1941.  She was a lifelong resident of Aurora and was involved in local politics.

Mr. and Mrs. Toussaint were married for fifty-five years until Charlotte’s passing in 1996.

They had one daughter Sharon Wampler.

Mr. and Mrs. Toussaint were active members of St. Therese Church in Aurora.

When they moved to Marywood, they became members of Annunciation Church.

In August 2006, Mr. Toussaint became a pioneer resident of Monarch Landing in Naperville.

He was an avid reader of history and especially enjoyed reading about Abraham Lincoln and the era of the Civil War.