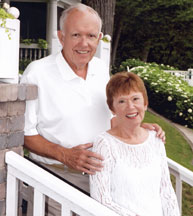 This fund was created by Charlotte S. and Frank K. Voris to provide grants to local charitable organizations.

Frank Voris was born in Aurora, Illinois.  He is a graduate of West Aurora High School.

He received his bachelor of science degree from the University of Illinois and earned his MBA from Northern Illinois University.

Mr. Voris was the executive vice-president of Merchants National Bank at the time of his retirement.

Charlotte Voris was born in Rockford, Illinois.  She is a graduate of West Rockford High School and the University of Illinois.

After her children were grown, she worked in the travel industry.

Charlotte and Frank Voris are members of New England Congregational Church in Aurora.

They have three sons and eleven grandchildren.