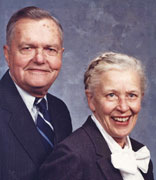 This fund was established to support a wide range of community needs in the name of the Voris Family.

Frank Voris (1907-1989) was a director of the Foundation for fifteen years, serving as chairman for two of those years.  He also served as a senior or emeritus director for seven years prior to his death.

Mr. Voris was past chairman and president of Merchants National Bank of Aurora and the Bank of Boulder Hill.

He also was founder and secretary treasurer of Walker Process Equipment, Inc.

In 1987, he received the Aurora Cosmopolitan Club’s 54th Annual “Distinguished Service Award” for his extraordinary service to the community.

Frances Voris (1909-2000) was a lifelong member of New England Congregational Church of Aurora.

She was the owner of The Knit Shop for many years and was active in the Child Welfare Society and the Tuesday Garden Club.

Mr. and Mrs. Voris are graduates of the University of Illinois.