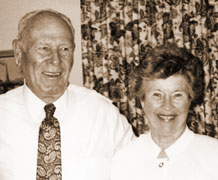 Robert and Shirley Waldo bequeathed a portion of their estate to provide scholarships for local students.

Shirley Waldo (1923-2002) was a graduate of West Aurora High School. She received a teaching degree from DeKalb Teachers College and a master’s degree from Northwestern University.

She was an educator in the East Aurora School System for twelve years. In addition, Mrs. Waldo was a past president of the Copley Memorial Hospital Auxiliary, director of the Women’s Chicago District Golf Association and member of Our Savior Lutheran Church.

Robert Waldo studied at North Central College and the University of Illinois. He was a proprietor of Healy Chapel and later of Daleiden Mortuary.