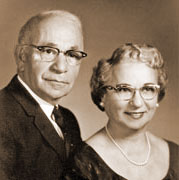 This fund was created upon receipt of an unrestricted bequest from the estate of Sol Weisman as a memorial to his parents.

Morris and Sarah Weisman were born in Russia and immigrated to the United States shortly before World War I.  They later met in Omaha where each had settled.

Mr. Weisman was a partner in the Aurora Window Cleaning Company for fifty-one years until the business was sold in 1968.

He was past president and treasurer of Temple B’nai Israel. He also was a member of the Aurora B’nai B’rith Lodge, the American Legion Roosevelt Aurora Post 84 and the Loyal Order of the Moose Lodge #400.

Sarah Weisman (1897-1983) was a member of Temple B’nai Israel and the Temple’s Sisterhood.

She also was a lifetime member of Hadassah and the National Council of Jewish Women.

Sol Weisman (1918-2003) was born in Aurora. He was a graduate of the University of Chicago and lived most of his life in Chicago. He was self-employed.