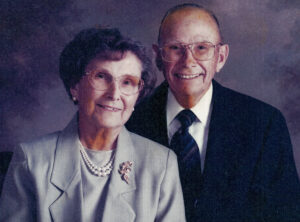 This fund was established by Doris Whitt as a memorial to her husband.

Lewis Whitt (1917-2000) was born in Gallatin, Missouri and was a graduate of Batavia High School.

He was a devoted member of Fourth Street United Methodist Church where he served on the Finance Committee and the Commission on Evangelism.

He also was a trustee of the church, a lay speaker and a Sunday School teacher.

His civic involvement included participation in the Boy Scouts of America and the Aurora Optimist Club.

In addition, he assisted with the annual development campaigns at Aurora University and Wayside Cross Ministries.

Mr. Whitt was the founder and owner of Whitt Bros. Garage, which opened in 1948.

She was the daughter of Eugene G. Farrer and Ella S. (McCrary) Farrer.

She married her childhood sweetheart Lewis Everett Whitt on September 8, 1937.  They shared sixty-two loving years together.

Mrs. Whitt was a long-time member of Fourth Street United Methodist Church where she and her husband raised their five children.

In addition, she was very active in the Cub Scouts and the P.T.A. at Beaupre School.

Mrs. Whitt was instrumental in the family business, Whitt Bros. Garage, where she served as bookkeeper until her retirement at eighty-nine years of age.