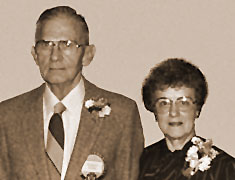 This fund was created in 1998 and established as an endowment in 2001.

J. Robert Winn (1922-1988) was a lifelong Auroran. He was a graduate of West Aurora High School and attended Carthage College.

He served in the United States Army during World War II. Mr. Winn joined his father in the family business, Winn Lumber Company.

He was a member of the Board of Education for School District 131 and the Aurora Optimist Club.

Marion Winn (1922-2007) was a graduate of East Aurora High School. She attended the Metropolitan Business College in Aurora and was employed at the United Gas and Electric Company in Aurora.

After raising her family, she worked in the accounting department of East Aurora School District 131 for twenty-five years. Mrs. Winn also was a member of the Aurora Optimist Club.