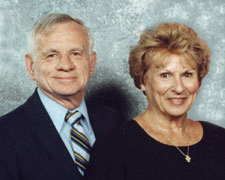 This fund was created in honor of Richard and Carole Wyatt, long-time supporters of the sports programs in West Aurora School District 129.

The net income of the fund provides grants for the tennis programs at West Aurora High School and the district’s middle schools.

In addition, grants are available for the boys’ basketball program at the high school.

Richard T. Wyatt (1930-2012) was born in Aurora, Illinois. He was a graduate of West Aurora High School and the University of Illinois.

He owned and operated the Aurora Tennis Club on Indian Trail for thirty-five years. During the 1970s through the 1990s, he proudly witnessed the state and national championship players produced by the club.

Mr. Wyatt also owned the Westwind Swim Club on Indian Trail in Aurora, where hundreds of children learned to swim.

An avid fan of the West Aurora High School Blackhawks, he and his wife Carole saw nearly every basketball game played between 1970 and 2005, and were members of the Illinois High School Basketball Coaches Hall of Fame.

His loyalty and devotion to the Blackhawks were recognized when he was inducted into the West Aurora High School Sports Hall of Fame.

She was a graduate of East Aurora High School and attended Northern Illinois University.

She and Richard were married in 1954 and had seven children.