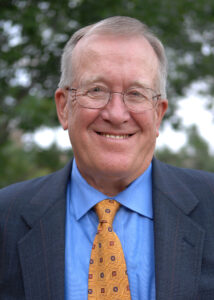 The Leon McNair Endowment Fund provides grants to the First Tee of Aurora and the Fox River Valley in the name of Leon McNair.

Grants awarded from the fund help defray the expense for local youth to participate in the sport of golf.

Leon McNair (1941-2016) was born in Amsterdam, New York.  He moved to Illinois where he attended Glenbard West High School. While in high school, he received the Most Valuable Player Award in Golf in 1959 and 1960.

He then played on the Southern Illinois University five-man golf team that won the NCAA Division II National Championship in 1964. In 1966, he received a degree in advertising and public relations from the university.

Leon McNair was the director of golf and manager of the Fox Bend Golf Course for thirty-eight years.

He served as the president of the Wadsworth Golf Charities Foundation where he was instrumental in launching Links Across America. This initiative has created a team of company partners from the golf industry to develop short golf courses (three, six or nine-hole courses) throughout the country.

These courses provide affordable golf for youth, families, adult beginners and individuals with injuries or disabilities. To date, eighteen such courses have been developed in thirteen states across the country.

Mr. McNair served as president of the Illinois PGA and member of the PGA Education Committee, National Oldsmobile Scramble Advisory Board and PGA President’s Council on Growing the Game.

He was a member of the board of directors of the First Tee of Aurora and Fox River Valley, National Alliance for Accessible Golf and Freedom Golf Association.

Mr. McNair had two children with his wife, Carole Anne.