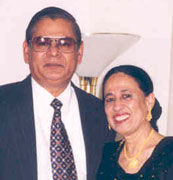 The family of Syed Masood H. Razvi (1941-2005) created a scholarship fund within the Community Foundation at the time of his passing.

Mr. Razvi lived in Aurora for thirty-five years. He came to America in 1960 to attend Oklahoma State University where he obtained his engineering degree.

He then received a Master’s Degree in Business Administration at Northern Illinois University (NIU).

He later worked in the engineering department at NIU.

Mr. Razvi was survived by his wife, Asmat Razvi, and four children.