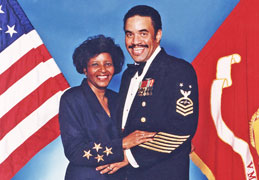 George Webster is a native of Pittsburgh, Pennsylvania. He is a graduate of Westinghouse High School in Pittsburgh and attended Pennsylvania State University.

In 1963, Mr. Webster enlisted in the United States Marine Corp where he attained the rank of Staff Sergeant.  His service included sixteen months in Vietnam.

After serving ten years in the Marine Corp, he joined the United States Navy.  From 1979 until 1982, he was a Navy recruiter in Aurora.

Upon his retirement from the service in 1988, he and his wife Cora Webster moved back to the Aurora Community.

Mr. Webster was an Aurora Election Commission Judge for twenty-one years and a member of the Aurora Citizens Police Academy Alumni Association for many years.

Cora Webster was born in Eudora, Arkansas.  She worked as a licensed cosmetologist in Texas and was employed by both the May Company and the KMART Corporation in Illinois.

Mr. and Mrs. Webster were married in December 1969 at Pilgrim Rest Baptist Church in Chicago. They have one son, one granddaughter, two grandsons, and two great-grandsons.