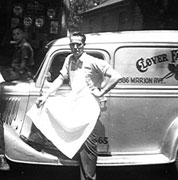 This fund, which provides scholarships to graduates of East Aurora High School, was established in 1998 by Alice Allen as a memorial to her husband.

Claude Allen (1916-1997) was in the retail grocery store business for over fifty years.

After graduating from North Central College in 1939 with a degree in business administration, Mr. Allen opened his first grocery store on Marion Avenue in Aurora.

In 1957, he moved to a larger location on Hinman and Fifth Avenue.

Mr. Allen was the quintessential friendly, local grocer. He was a confidant, mentor and banker to the neighborhood families he served.

She attended North Central College. In 1940, she married Claude Allen.

Like her husband, Alice Allen touched the lives of others in a meaningful and lasting way.