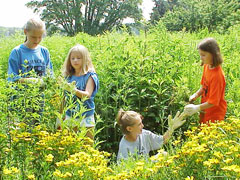 This fund was created to provide scholarships to students pursuing careers that will positively impact the environment and its inhabitants.

Barbara Burgin (1907-1993) was born on a farm near Wheaton, Illinois. She later moved to Aurora, where she lived most of her life.

During World War II, Mrs. Burgin was a butcherette at the Kroger Grocery Store in downtown Aurora. When the men returned from the war and assumed those positions, she became manager of several departments at Krogers.

Her daughter Carol Ehrhart (1932-2018) was born in Aurora. A graduate of East Aurora High School, Mrs. Ehrhart was employed at Lyon Metal in Aurora.

In 2008, she received an award from the City of Aurora as one of the city’s Volunteers of the Year. Mrs. Ehrhart volunteered for the Aurora Public Library and the Friendly Center Club at the Fox Valley Park District. She was a member of Our Savior Lutheran Church.

Her husband Edwin Ehrhart (1910-1984) was born on a farm in Naperville. He attended the Naperville schools and also worked at Lyon Metal. Mr. Ehrhart was a member of St. Joseph Catholic Church.

Mrs. Ehrhart established the fund to encourage local students to further their educations. As she stated, “Education is essential to our survival and it is my hope that these scholarships will make a difference in the lives of future generations.”