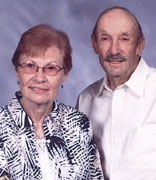 Charles Dhom (1932-2017) was a graduate of Robinson High School in Robinson, Illinois.

He was a lifetime member of Aurora Local 319 (501) Plumbers, Fitters and Welders.

After retiring in 1992, he worked at the church for several years by helping with facility maintenance and upkeep.

Dorothy Dhom was raised in Chicago.

She is a graduate of Gage Park High School and Wilson Junior College.

She is an active member of Our Savior Lutheran Church.  She sings in the chancel choir and was a Sunday School teacher and member of the Women’s Guild.

Mr. and Mrs. Dhom have three children and seven grandchildren.