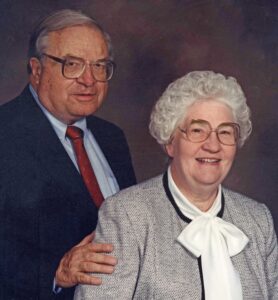 This fund, which was created upon receipt of a bequest from the estates of Edward and Frances Fauth, provides income for the Community Foundation’s discretionary grantmaking program.

Edward Fauth (1922-2009) was born in Aurora, Illinois. After graduating from East Aurora High School, he began working for the Barber-Greene Company.

He then served with the 477th Railroad Battalion of the United States Army in World War II which was involved in the Battle of the Bulge.

After the war, Mr. Fauth returned to Barber-Greene and continued his employment with the company for thirty-one years. During this time, he received degrees in mechanical engineering from Michigan State University and the Illinois Institute of Technology.

He then became Dean of Community Services with Waubonsee Community College. While at the college, he earned his doctorate in education. He retired from the college in 1987.

He was the first district governor of Rotary from the Aurora Noon Rotary Club. He also was active in the local and national societies of professional engineers.

Frances Fauth (1925-2012) was born in Aurora, Illinois. She was a graduate of East Aurora High School and earned her Registered Nursing Degree from St. Luke’s Presbyterian Hospital in Chicago.

Mrs. Fauth worked as a nurse for Dr. Charles Wunsch for many years. She then trained to be a dental assistant and worked for her son in his dental practice until her retirement.

As a community leader, Mrs. Fauth served on the boards of directors of Plum Landing, P.E.O. Chapter DD and the YWCA of Aurora. She also volunteered for the Waubonsee Community College Literacy Program.

Mr. and Mrs. Fauth were members of the New England Congregational Church in Aurora.