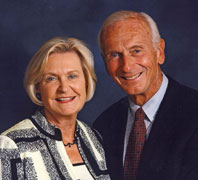 Mr. Glenn is a graduate of East Aurora High School. He attended Dartmouth College where he earned his bachelor of arts degree in history and an MBA from the Tuck School of Business.

Marjorie (Mardi) Glenn is a graduate of West Aurora High School and attended DePauw University where she earned her bachelor of arts degree in music education.

During their careers, Mr. and Mrs. Glenn worked together to grow and further establish Olsson Roofing Company as an ongoing professional leader in the commercial roofing industry.

In 1987, the Glenns created the Olsson Roofing Company Scholarship Fund with the Community Foundation to encourage the opportunity for college level education within the ranks of construction families.

In addition to their dedication to Olsson Roofing Company and raising their three children, both Mr. and Mrs. Glenn served on numerous community and charitable boards.

Although the Glenns no longer reside in Aurora, they wish to recognize the city, its history, the cultural and educational opportunities as well as the people of the community for enriching their lives.

It is their desire that their gift benefit the lives of those residing in the Fox Valley area now and in the future.