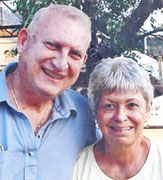 This fund was created to support scholarships for graduates of high schools in the City of Aurora or the City of Oswego.

Robert Golz (1934-2003) was born and raised in Aurora.  He was the son of the late Herbert Golz, the founder of Equipto Electronics in Aurora.

Mr. Golz joined the company in 1960 as vice president of manufacturing.  From 1979 to 1999, he served as the chief executive officer and later became the firm’s chairman of the board.

According to Joyce Golz, her husband placed a high value on the lives of his employees.  He often changed company policies to accommodate the schedules of working mothers.

He also limited the number of business trips in a year so that salespeople could spend more time with their families.

Joyce Golz  joined Equipto Electronics in 1960.  As the company grew, she became the sales supervisor and assistant to the sales manager.  She retired in 1999.

Mrs. Golz established this fund to honor her husband and the strong principles by which he lived his life.