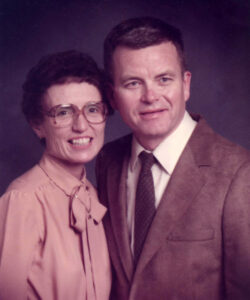 The Robert C. and Maureen A. Granger Scholarship Endowment Fund was created to assist graduates of East Aurora High School or West Aurora High School who are furthering their studies in a four-year college or university, seeking a degree in chemistry or chemical engineering.

This scholarship fund was established by Maureen Granger to help aspiring chemists earn a degree in the profession that her husband loved.

Robert (Bob) Granger was a graduate of East Aurora High School where he developed a lifelong interest in chemistry. He graduated from Northwestern University with a degree in chemistry.

He worked for the Burlington Railroad as a chemist/chief chemist for fourteen years. He then took a position with Sears Roebuck in Chicago as a chemist/product engineer until he passed away in 1990 at the age of sixty-one.

He and his wife Maureen were married for forty-one years before his passing. They raised their four children in Aurora.

Mr. Granger was a member of the American Chemical Society. The couple were members of Trinity Episcopal Church in Aurora.

Maureen (Avery) Granger was a graduate of West Aurora High School. She earned degrees in education and educational administration from Northern Illinois University.

She taught for twelve years for the West Aurora School District and was principal of McCleery Elementary School (West Aurora) for sixteen years.

Mrs. Granger served as a board member of several Aurora organizations. She is a member of Aurora Area Retired Teachers Association, Aurora Kiwanis Club, Batavia Woman’s Club, West Aurora Reading Circle and Calvary Episcopal Church in Batavia. She also is a trustee of the West Aurora Cemetery Association.

The intent of this scholarship fund is to assist East Aurora and West Aurora High School graduates pursue a professional career in the field of chemistry.