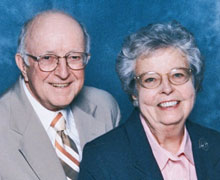 This fund was created to provide income for the Community Foundation’s discretionary grantmaking and scholarship programs.

William A. Greene was born in Aurora and had lived most of his life in his hometown.

Mr. Greene was associated with the Barber-Greene Company for thirty-six years, retiring as vice-president of administration and secretary. He also was a director of the firm.

He served on numerous boards of directors including Aurora University, Aurora Family YMCA, Greater Aurora Chamber of Commerce and the Rotary Club of Aurora.

His father William B. Greene was a co-founder of the Barber-Greene Company and also was one of the founding members of the Community Foundation.

Marjory Greene was born and raised in Chicago.  She was a graduate of the University of Chicago and has been active in the community and school-related organizations.