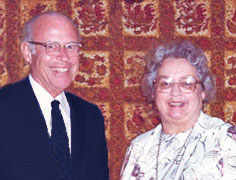 This fund, created in 1964, was established as an endowment in 1990 to provide income for the Community Foundation’s discretionary grantmaking program.

Malcolm Jones (1904-1998), a lifelong Auroran, was a graduate of Dartmouth College.  He was vice president of Richards-Wilcox Manufacturing Company in Aurora.

Mr. Jones was a director of the Community Foundation for fifteen years, serving as chairman for two of those years.  He also served as a senior or emeritus director for eighteen years.

Lydia Jones (1911-1986) was a graduate of Northwestern University.  She held leadership positions with many charitable organizations including the American Association of University Women, Child Welfare Society, United Way, Woman’s Club of Aurora and YWCA Aurora.

Malcolm and Lydia Jones were devoted members of New England Congregational Church, joining in 1920 and 1933 respectively.