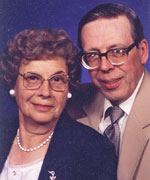 The Edward and Genevieve Jungels Scholarship Fund was established to provide scholarships to students pursuing studies within the field of veterinary medicine.

Edward Jungels (1929-2012) was born and raised in Aurora.  He attended Sacred Heart Grade School, St. Nicholas School, and is a graduate of East Aurora High School.

For twenty-nine years, he worked at AllSteel in the tool room and was a member of the AllSteel Quarter Century Club.

She was employed by Pictorial Package in Aurora for ten years as a proof-reader.

In 1966, Mr. and Mrs. Jungels moved to Montgomery, Illinois.

In 2018, the Community Foundation received a bequest that endowed the fund.

Edward and Genevieve enjoyed many years of caring for several canine friends.  It is in this spirit that they chose to establish a fund to provide support to future veterinarians.