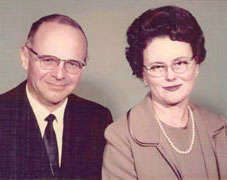 This fund was created upon the receipt of a bequest from the estate of Betty Kahle.

The fund provides grants to the First Presbyterian Church of Aurora for the Sunday School and Christian Education Programs.

Warren Kahle (1921-1996) was a graduate of North Central College. He served in the United States Navy during World War II and was stationed in England and Ireland.

He was an assistant purchasing agent at Barber-Greene Company until his retirement in 1982.

Betty Kahle (1919-2005) was a graduate of East Aurora High School. She was employed for over forty years at the Child City of Mooseheart.

She served as executive assistant to five successive directors, including the period of the promotion and completion of the Mooseheart House of God.

Mr. and Mrs. Kahle were members of the First Presbyterian Church of Aurora.