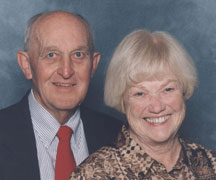 Al McCoy (1926-2016) was a lifelong resident of Aurora. He graduated from Marmion Academy in 1944 and attended Aurora University and the University of Montana.

He was a combat veteran of World War II, serving on the aircraft carrier USS Monterey in the South Pacific.

Mr. McCoy was Mayor of Aurora for twelve years from 1965 to 1977. During his tenure, Aurora annexed over 6,800 acres of land giving rise to Aurora’s distinction as the second largest city in Illinois.

Mr. McCoy was past president of The Aurora Foundation (now the Community Foundation) and was a member of the board of directors for twenty-seven years.

Mrs. McCoy was a member of New England Congregational Church and sang in the church choir for forty-one years.

Mr. and Mrs. McCoy were married for fifty-three years and were active in numerous civic and charitable organizations.