OFFICE CLOSURE: Due to maintenance at our Aurora office, the office is closed until further notice.  Staff will be available remotely via phone and email during regular business hours. 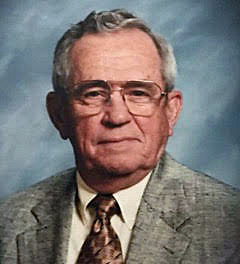 This fund was created in memory of John W. McDougal by his family. It supports the McDougal Athletic Character Award, which is awarded to male athletes from West Aurora High School.

John W. McDougal was born March 16, 1924 in Okmulgee, Oklahoma, the son of the late Claude and Annie Rebecca (Cunningham) McDougal. John was the son of an oil well driller who moved from Oklahoma to southern Illinois to follow the oil boom. In southern Illinois, John made his mark as an outstanding football and basketball player at Salem High School.

In 1944, during his junior season on the basketball team of which he was captain, John and his teammate Jim Finks placed 3rd in the State Basketball Tournament. Due to his age, John was not allowed to finish his senior year, but instead was drafted in WWII to be a member of the US Navy and then later a Marine medic. He trained at Great Lakes Naval Station and served in Hawaii, Japan, and the Peleliu Islands.

John then began a 40-year basketball coaching career that spanned five decades. He coached at Palestine High, Carmi High, and Prospect High. He became the coach at West Aurora High School in 1965. During his high school coaching career, he qualified for the Illinois Elite “500” club and ranks among the state’s winningest head coaches with 692 combined victories, 556 of which were at the high school level. Under his tutelage, West Aurora’s 1973 basketball team placed 3rd place at State. Following West Aurora’s 1976 2nd place finish in the IHSA state tournament, John was hired to coach at Northern Illinois University.

At NIU, John’s teams won 136 games, and he helped guide NIU to their first NCAA tournament appearance in 1982. He is still the winningest head basketball coach in NIU history. After 10 seasons at NIU, he became an assistant coach at Western Michigan University for two seasons. John then became the head coach at Rockford Lutheran High School, which placed 4th in the State Tournament in 1997. John retired at that time. He is believed to be the only man to coach in both the IHSA 2A and A state tournament finals as well as to compete as a student athlete in the state finals.

John was blessed with many wonderful players and assistant coaches throughout the years. He was named to the High School Hall of Fame at Salem, Carmi, West Aurora, and Rockford Lutheran High Schools. He also made the Hall of Fame at the University of Evansville and NIU.  He was inducted into the IBCA Hall of Fame and in 2006, he was voted to the IHSA’s Centennial State Tourney “100 Legends” list.

John McDougal passed away on October 28, 2016 at the age of 92. He was preceded in death by his beloved wife Betty Anne Meyers.  He is survived by his sister Mary Anne and daughters Rebecca, Mary, and Nancy. He also leaves behind his seven cherished grandchildren, four great grandchildren and several nieces and nephews.