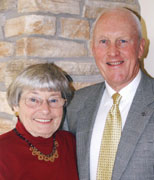 John McKee is a life-long resident of Aurora, Illinois and is a graduate of West Aurora High School.

He then was employed in the family owned business, McKee Door Company, until it was sold in 1986. He continued working with the successor company, Porvene-McKee, until 1994.

Mr. McKee has served as director and president of the Aurora Family YMCA, The Aurora Foundation (now the Community Foundation of the Fox River Valley) and the Kiwanis Club of Aurora.

He also has been a director of Mental Health and Mental Retardation Services, Inc., and trustee of Aurora University and the Aurora YWCA.

In 1992, he received the Cosmopolitan Club’s Distinguished Service Award and, in 2005, he was named recipient of the Kiwanis Club’s Service to God and Fellowman Award.

Gwen McKee (1937-2014) was born in Chicago, Illinois. She was a 1958 graduate of Beloit College and was employed for two years at IBM as a Systems Representative.

She was a talented and prolific quilter, producing quilts for family, friends and charitable causes.

Mrs. McKee was a member of New England Congregational Church, where she participated in the chancel choir.

The couple has three children.