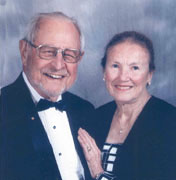 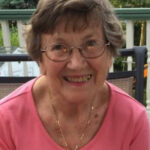 Robert (1920-2012) Mitchler was a native of Aurora. He graduated from East Aurora High School and Aurora University.

He was employed by the CB&Q Railroad until 1941. He then served in the United States Navy during World War II.

In 1950, he was recalled to active duty in the Korean War.  Mr. Mitchler also worked for Northern Illinois Gas.

In 1964, he was elected to the Illinois State Senate where he served until his retirement in 1981.

Helen Mitchler (1924-2020) was also a native of Aurora. She graduated from East Aurora High School and the Copley School of Nursing.

Her career in nursing was with Copley Memorial Hospital and the Dreyer Medical Clinic.

Both Mr. and Mrs. Mitchler were active in community service.  Robert Mitchler served with numerous military and veteran organizations and Helen Mitchler with social, political and medical support units.

In 1953, the couple moved to rural Oswego in Kendall County.