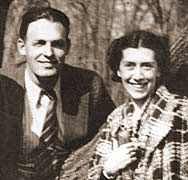 This fund was established to administer a bequest from the estate of Dorothy Dewing Perkins (1913-2007).

Mrs. Perkins was the granddaughter of Dr. George H. Dewing, who was a member of the faculty of Mendota College in 1893, the year the college was founded.

The college moved to Aurora in 1912 and was renamed Aurora College.  Mr. Dewing served as the chairman of the Department of History and Social Sciences at Aurora College where a plaque commemorates his achievements.

She graduated from the Grant Hospital Nursing Program in 1935 and worked as a private duty nurse until her marriage in 1938 to George Kenneth Perkins (1906-1967).

Mr. Perkins, a native of Quebec, Canada, immigrated to the United States in 1926 and later became a U.S. citizen. He graduated from Aurora College in 1932.

Mr. Perkins was employed by International Harvester Company as a salesman, first in Ottawa, Illinois and later in Dixon, Illinois.

In 1940, Mr. and Mrs. Perkins moved to Yorkville, Illinois and, with two partners, opened Yorkville Implement, an International Harvester store.  Later, they bought and operated the business together.