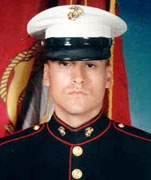 This fund, created to honor the life of Hector Ramos, provides scholarships to graduates of East Aurora High School.

To be eligible for these awards, students must have demonstrated respect for the educational process throughout their high school years and a resolve to be successful in their pursuit of a higher education.

In the awarding of these scholarships, preference is given to those students who were involved in the fine arts curriculum at East Aurora High School.

He achieved the rank of Lance Corporal in the United States Marine Corps.

He died on January 26, 2005 while supporting Operation Iraqi Freedom when his helicopter crashed in a desert sandstorm near the town of Rutbah, Iraq.

Hector Ramos excelled in the fine arts and drama at high school. He planned to pursue a career as an artist upon his return from the service.

One of the school’s advisors characterized him as a born leader. “Some kids just stand out. Hector was one of those students.”