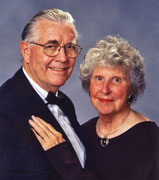 This fund was created in 2005 by the family and friends of G. William and Mary D. Richards to honor their 50th Wedding Anniversary.  It was established as an endowment in 2008.

G. William Richards (1933-2009) was born in Chicago, Illinois. He received his undergraduate and law degrees from the University of Illinois.

He was admitted to practice in Illinois in 1957. Mr. Richards was a magistrate for the City of Aurora and the 16th Judicial District Circuit Court. He also was an assistant states attorney for Kane County.

Mr. Richards was the first president and chairman of the board of the Bank of Montgomery.

Mary Richards (1933-2007) was born in Aurora, Illinois. She was a graduate of West Aurora High School and the James Ward Thorne School of Nursing of Passavant Hospital at Northwestern University.

She was employed by Dreyer Clinic in downtown Aurora. Mrs. Richards was a member of the Kane County Board for twenty-four years.

Mr. and Mrs. Richards devoted their lives to the service of numerous charitable organizations in the Aurora community.  They also were members of Holy Angels Church in Aurora.