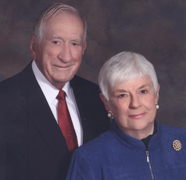 Gary and Mary Ruth Roberts are lifelong residents of Aurora.

Mr. Roberts was born in Marion, Illinois. His family moved to Aurora when he was three years old.

Upon graduation from East Aurora High School, he entered the military.  In 1946 and 1947, Mr. Roberts served as a Lieutenant in the 1st Cavalry Division in Japan.

He was employed by the Freeman United Coal Mining Company for thirty-nine years.  He retired in 1987 having achieved the position of Vice-President of Sales.

Upon retirement, Mr. Roberts enjoyed volunteering at Provena Mercy Medical Center where he served for seven years as a member of the board of directors.

She continued her studies at the St. Francis Hospital School of Nursing in Evanston, Illinois.  She graduated from St. Francis and later from Loyola University with a Bachelor of Science Degree in Nursing.

As a long-time cancer survivor, Mrs. Roberts was active with the American Cancer Society where she volunteered for thirty-five years as director of the Reach to Recovery Program.

Her other activities included serving as a Eucharistic Minister at Holy Angels Church, and volunteering for the Waubonsee Literacy Program, Provena Mercy Medical Center, Holy Angels School and Hesed House.

Mr. and Mrs. Roberts are the proud parents of five children and eleven grandchildren.