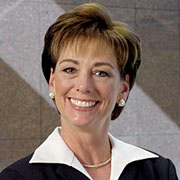 The Judy Whinfrey Memorial Nursing Scholarship Fund was created to honor the life of Judy Whinfrey, a well-known civic leader in the Fox Valley Area.

The fund has been launched with a generous gift from the Central DuPage Hospital Foundation (now known as Northwestern Medicine Foundation), which partnered with Hewitt Associates of Lincolnshire and Mrs. Whinfrey’s husband, Peter Whinfrey, to establish a significant endowment within the hospital foundation in Mrs. Whinfrey’s name.

Judy Whinfrey (1949-2010) was born in Evanston, Illinois.  After graduation from the University of Illinois, she joined Hewitt Associates, a global human resources consulting and outsourcing company, where she spent more than thirty years as a principal and managing consultant.

As one of the first women to become an account executive in the mid-1970s, she co-founded Hewitt’s Women in Leadership initiative.  She also served on the Hewitt executive committee and was a past member of the company’s board of directors.

Mrs. Whinfrey was a member of the board of directors of Benedictine University in Lisle, Illinois and Central DuPage Hospital in Winfield, Illinois.  She served as chairman of the board of the hospital from 2004 to 2008.

Judy Whinfrey lived life to its fullest and was an inspiration to those whose lives she touched.  It is in this spirit that a nursing scholarship was created with the Community Foundation of the Fox River Valley.