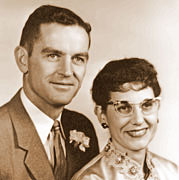 The Harry & Viola Worland Fund was created at the time of Mr. Worland’s passing.

Mr. Worland served in the United States Army from 1941-1945 during World War II and was stationed in the South Pacific, Australia, New Guinea and the Philippines.

An avid bowler, he and his wife Vi enjoyed the Friday Nite Elks Club and Mixed League.

She and Harry Worland were married in 1956 at a private ceremony presided over by Dr. Harold Teed, pastor of First Presbyterian Church in Aurora.

Mrs. Worland was an avid golfer, playing in many tournaments at Phillips Park and surrounding area courses.

She was a fifty year member of the Alamo Chapter #693 Order of the Eastern Star.

This fund, created in 2007, became an endowment in 2013 through the funding of an unrestricted bequest from Mr. and Mrs. Worland’s estate.