By Matt Brennan
For The Beacon-News
Fox Valley Villages Sun 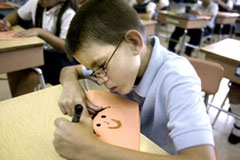 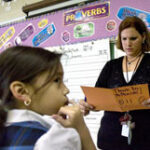 Third-grade teacher Jill Hardekopf handed out pieces of orange construction paper to her students, with the instruction to write thank you cards to the man who gave them a valuable learning opportunity.

Her class at St. Joseph Catholic School on High Street is sponsoring a child about the same age in El Salvador, named Jessica Castillo Chilin. To sponsor the girl, the class is using $360 of a $1,300 donation made by Aurora resident Jack Marzuki to the Community Foundation of the Fox River Valley.

“I thought it was a great opportunity for my third-graders,” Hardekopf said. “So I sat down with my students and we chose a young girl.”

Jessica lives in San Francisco, El Salvador. Her favorite subject is math. She lives with her mother, father and two sisters. The donation from the students at St. Joseph’s will go — among other things, toward nutrition, clothing and gifts for Jessica on her birthday and Christmas.

In order to get the funds from the Community Foundation, the Aurora youngsters had to do some form of local community service. So they will be cleaning up litter at Pigeon Hill Park, across the street from the school.

“It shows them a little of giving back to others, not just far away, but also in our community,” Hardekopf said.

The students came up with several different ways to say thank you to Marzuki this week, drawing smiley faces and other pictures in the cards. Hardekopf had the major words from the lesson written on the board — “appreciate” and “Mr. Marzuki” — so that the students could be sure of the spelling.

“What are we thanking him for?” she asked her students. “Giving us the money.”

Marzuki set up the fund with the Community Foundation in honor of his parents, Don and Marie Marzuki.

“I’ve seen a lot of poverty in the world,” Marzuki said. “I created this fund to alleviate some of that. And along with that I wanted to involve some young people.”

So he decided to have some of the area’s younger generation adopt poorer children from overseas. He also wanted the effect to be felt at home, and teach the children an important lesson through their community service, he said.

“They will appreciate it because it’s something they earned rather than something that was given to them,” he said.

The students enthusiastically wrote out their thank-yous to Marzuki and designed their cards. As they finished, they brought them up to show their teacher what they had done.

Hardekopf also plans to have the children write to Jessica at least once a month.